skip to main | skip to sidebar

Several high quality actors, Jeff Bridges, Julianne Moore, and Djimom Honshou, underutilized in a weakly plotted 3d CGI fest. How many times can we look over the edge of a towering cliff? In Seventh Son, a goodly number of times. Way too many times, actually.
Tom Ward is the seventh son of a seventh son. So when Master Gregory (Bridges) loses his apprentice (Kit Harington, looking so very Jon Snow) in the first scene, he grabs Tom. Tom's mum presses an amulet into his hands, and the action rolls downhill. Tom grows up, falls in love and becomes a Spook like Master Gregory. And lots of witches burn, except the love interest.
Scenery? Check. A lot of outdoors shots to make you think you're still in New Zealand, watching a Peter Jackson film. CGI? Check. Bombastic score? Check. Sets left over from The Last Airbender? Check.
How bad was this movie? So bad I spent a good part of it thinking it was a sequel to Season of the Witch, the Ron Perelman/Nicholas Cage disaster.
Watch only if you like 3D CGI. A lot.
Posted by Unknown at 10:12 PM No comments:

I saw the debut episode on a plane trip this week.
Crane is re-imagined as an Oxford don turned soldier, then traitor, then spy for General Washington. (Washington did have a strong belief that spies were important in winning the war.) This background allows Crane to play both the role of frontline hunk _and_ team librarian/source of all occult knowledge. Crane has back-up in the occult area from his wife of 250 years ago, who just happens to be a witch, and trapped somewhere by Unamed Evil so that she can drop clues on Ichabod through visions, dreams and mirrors.
Washington Irving's Crane was a comical, credulous local school teacher who loved ghost stories. The name Ichabod makes sense in Puritan New England, but not England itself. And as anyone from Montclair knows, the Crane family was important in this part of New Jersey during that time. Anyway.
So the bucolic town of Sleepy Hollow turns out to host multiple competing occult groups. Three killings in the first episode, two of members fo the sherrif's department. Crane teams up with the remaining Deputy to stop the Apocalypse. No, really, there are high stakes in this show.
It all feels a bit like National Treasure mashed up with Buffy. Crane provides some fish-out-water time travel humor. We can only hope it will be better than The Dome.
Posted by Unknown at 10:52 AM No comments:

Cell phone bricked, time for a new one

Customer loyalty to electronic components doesn't really make sense, but it obviously exists. I've had a preference for Motorola since my days programming an Apple II. (I suppose the iPhone 5c would be the Apple LXVI if they had kept that naming scheme.) I was actually upset when Apple dropped Motorola CPUs in favor of Intel - and I didn't even use a Mac at that point.

My Motorola prejudice extended to smartphones, and I was a loyal Droid buyer for the last several years. No more.

My Droid 2 bricked itself yesterday. Somehow, one of the battery pins worked loose, though I have never dropped the phone. It stopped working without being plugged in to the charger, which defeats the purpose  of a mobile phone.

One quick trip to the Verizon store, and I walked out the proud owner of a Samsung Galaxy S4. Quad core 4G Android goodness. In white. Sorry Moto. The Droid line just didn't have it for me any more.

Email ThisBlogThis!Share to TwitterShare to FacebookShare to Pinterest
Labels: personal

Forever Tango is completing its current run on Broadway tonight. The limited engagement brought the show back to New York City for the first time in many years.

This is a must see show. It captures the spirit of Argentine Tango in a wonderful mix of music, dance, song, and spirit. The format of the show is basically an alternation of music only numbers, performed by the small on-stage orchestra, and dances performed in front of and to the music of this orchestra. Much of the music is arrangements of pieces by Astor Piazzolla, one of the great tango composers.

In the current staging, this pattern was punctuated by one song and one comic dance number in each act. There are also a number of more balletic performances that involve over the head lifts and other athleticism by both the male and female performers.

While impressive, these modern riffs on Argentine Tango only showed how powerful the real thing can be. Marcela Duran, in particular, was spectacular. It was a pleasure to see her after the show interacting with fans outside the stage door of the Walter Kerr Theater on 48th Street.

Sit where you can see all the footwork. Tango has some of the most explosive and flashing footwork of any dance.

The on-stage orchestra was unnecessarily miked. The reult was that the clicking keys of the bandoneon were as loud as the music.

Overall, a great experience. See it if you can!

Posted by Unknown at 2:35 PM No comments:

Let's say you're in synagogue, praying on the holiest day of the year. You learn that someone you think is a big sinner is in the synagogue also. Do you:

This person's actions show they have no clue why synagogues exist.

And where was the rabbi while this was taking place? That the jerks act out is sadly expected in our wonderful Jewish Taliban societies. Where is the rabbi that is supposed to keep order and provide a role model? Sitting on his hands.

Jewish Taliban is sadly and nauseatingly appropriate for Satmar and its handling of the Nechemya Weberman scandal, and subsequent events.

I saw RIPD last night because Wolverine had sold out by the time I got to the theater. There, I could probably stop the review with that sentence, because it completely encapsulates what a second rate movie RIPD is.
RIPD is this summer's attempt to recreate Men In Black. And Ghostbusters. And Hellboy. And even a bit of Constantine. Can you say 'derivative'? Watching any of those again would be time better spent than in the theater with this movie.
The big upside is for players of "6 Degrees of Kevin Bacon" because, yes, Kevin Bacon is in this movie. Yes my friends, _that_ is the big upside. Other upsides - a Boston based film without Ben Affleck in it. I know, I'm stretching.
Posted by Unknown at 5:28 PM No comments:

I'm a robot with a laser in my head, and I'm here to help you

Boston Dynamics, maker of the Big Dog robot mule for the US Army, unveiled their latest creation - Atlas.

Atlas shows why we build humaniform robots - we've already built a world for ourselves, and robots have to fit in. Atlas will be able to open a door, drive a car, and handle a fire hose, which is good, because it is being billed as replacing humans in high hazard areas such as nuclear power plant disasters.

If DARPA is funding Atlas development as a charitable act for the nuclear power industry, they should get on the same page, public relations-wise. I'm pretty sure there won't be any more nuclear accidents, right, industry spokespeople? And to be fair, they only happen once every 20 years, anyway.

And why else would DARPA fund a humaniform robot with a laser in its head?

Posted by Unknown at 1:34 PM No comments: 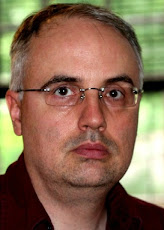